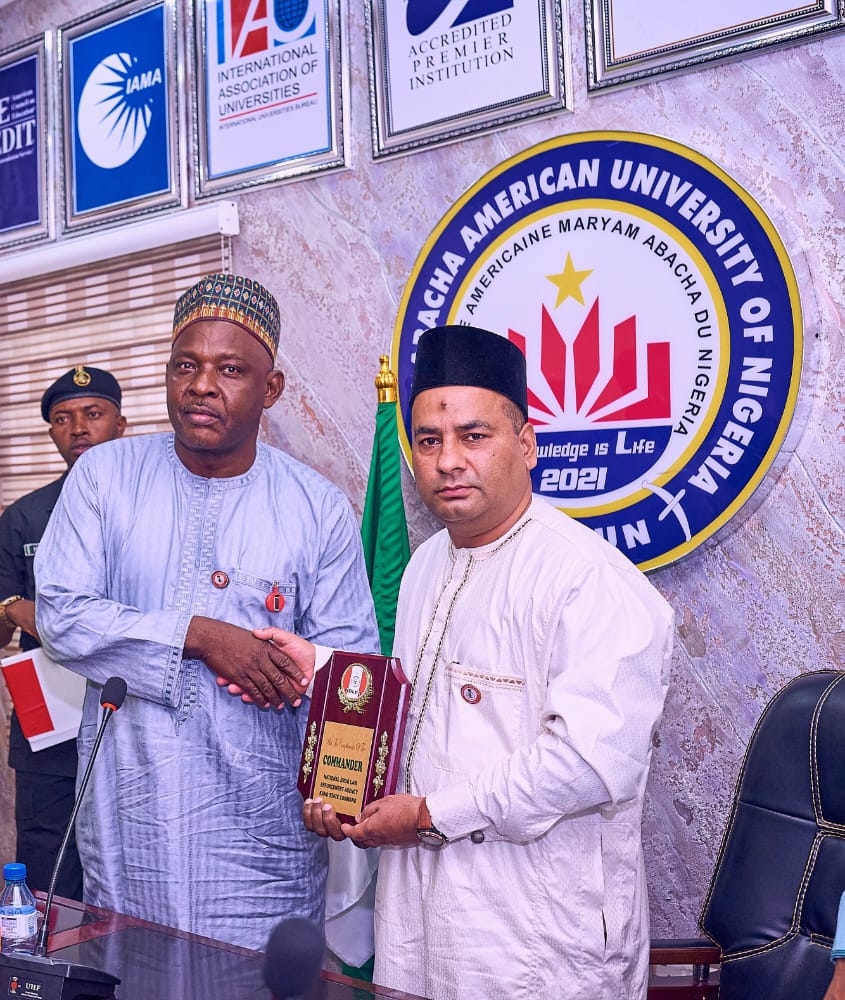 The National Chairman of the National Drug Law Enforcement Agency, (NDLEA), Brig. Gen. Mohammad Buba Marwa, has decorated the President of Maryam Abacha American University of Nigeria, Prof. (Dr.) Mohammad Israr with a badge as the Ambassador of War against drug abuse in Nigeria.

The Kano State Commander of the NDLEA, Abubakar Idris Ahmad made the decoration on behalf of the National Chairman of NDLEA when he paid a courtesy visit to the University on Tuesday, October 25th, 2022.

“I am decorating you with this badge as the Ambassador of War against drug Abuse in Nigeria on the directive of our National Chairman, Brig.-Gen. Mohammad Buba Marwa,” the Kano State NDLEA commander said.

He said the aim of the visit was to establish a collaboration with the University in order to enable the agency to contribute its quota towards the moral upbringing of the students while in the University.

He said the target of drug peddlers is to destroy the future of youths by targeting innocent people through the creation of a market for their illegal products.

The NDLEA commander said the agency will soon commence surveillance around the school and students’ hostels with a view to tracking down peddlers of the illicit drugs in the areas.

He added that the agency will support the University in the fight against drug abuse among students in order to make the University a model Institution in Nigeria.

Earlier in his opening remarks, the Vice President Administration, Dr. Habib Awais Abubakar described the visit as an important one considering the significant role the agency plays in tackling drug abuse especially among the youth.

He said the University is ready to partner with the agency so as to ensure that the Institution remains free from drug abuse for conducive teaching and learning.

Also in his contribution, the Director Institute of Africa Higher Education Research and Innovation, Dr. Abubakar Sadiq Haruna said students seeking admission into the University have to undergo drug tests at the University clinic as the institution has zero tolerance for drug abuse and other related offenses.

He said any prospective student tested for drugs and the test results is found to be positive, will not be admitted into the University.

Dr. Haruna, who expressed hope that the partnership would yield fruitful results, added that the University Management will continue to do its best to sustain the fight against the menace.

In his remarks, the Director Academic Planning and Quality Assurance, Dr. Nura A. Yaro described the visit of the NDLEA officials as timely in view of the importance of the agency.

He said the University would from time to time invite officials of the agency with a view to sensitizing students on the dangers associated with drug abuse.

In his vote of thanks, the President of MAAUN, Prof. (Dr.) Mohammad Israr, thanked the NDLEA team for the visit.

He said the University would give all the necessary support and cooperation to the agency in order to make the collaboration a success.

Other Principal officers that also attended the meeting include the Vice President Finance, Mr Abdulrazaq Kayode among others.

The State NDLEA Commander had also presented a plaque to the President of MAAUN as part of the activity to commemorate the visit.